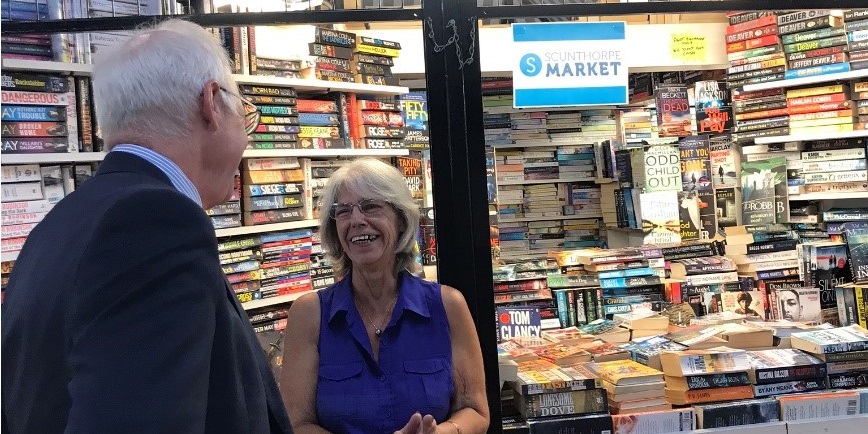 For centuries markets have been the lifeblood of towns. Traders hawk their wares. People gather, moving from stall to stall, enjoying the hustle and bustle of a lively commercial community. Scunthorpe’s Market has been in its current location for as long as people can remember. When I walked round today there were thriving businesses who told me they’ve traded for decades, sometimes generations in this market that supports our whole area. It employs around 200 people.

Back in the Autumn Conservative North Lincolnshire Council said they wanted the Market gone from its current site so they can grab a capital receipt by selling it off. Typical Tories, knowing the price of everything and the value of nothing. Traders and customers came together in a show of community anger and strength. Very quickly over 20,000 local people had signed a Save Scunthorpe Market petition. This showed real, palpable community commitment to our area’s culture and heritage. It should have made the Conservative Council think again.

But they are clever and cunning, not to be underestimated. Before long their tune had changed. They started talking about moving the Market elsewhere. Without involving the traders they identified the now empty ex-BHS premises as the place they would move the market to. As one trader said to me ‘If it is such a successful location why do shops keep closing there?’ Fair point. But not one that a Conservative Council who knows far more about running businesses than the successful entrepreneurs that have run market stalls for generations will pause to consider! And many a trader has pointed out to me the Conservative Council Leader’s track record of personal failed business enterprises does not give them any confidence in him!

So the Council has cracked on with its Project. A project that it has involved no-one else in. It even announced a name change for the new market plucking ‘St John’ out the air. They know best. This has been clear in the one-to-one meetings they’ve had with traders in an attempt to divide and rule. These were promised as opportunities to explore how to make the New Market Project work. Traders went along in good faith but came out of meetings with a sense that they were being given a take it or leave it option. Rents more than doubling for many businesses with no clarity given about future rates. And for significantly smaller units with much less storage and warehousing. No help with moving from one location to another. And if you want a downstairs unit you need to trade 5 days a week. So people, like the second hand book stall, that currently trades for 2 days a week will need to try 5 if the elderly, less mobile customers that it relies on are to have easy access to the stall. And businesses like the butchers, the pet shop, the carpet shop, the greengrocers that currently open 6 days a week will only be able to open 5. The Council immediately cutting their income by the equivalent of 6 weeks’ trade a year. Outrageous! Can you imagine the uproar if this was done to any other business?

So what’s happens now? There’s real anger amongst customers and traders. But resignation too. How can they hold on to what they see as dear when a bully boy Council pushes them about?   Its PR machine showing off an empty but sweet smelling store in the new location. ‘Think about the opportunity’, the Council purrs.

The traders are considering their business options. The closure of Scunthorpe Market against the clear will of local people means they are facing a significant interruption to their businesses. Some are finding that it will be cheaper and more effective to move their business to elsewhere on the High Street. Some are going on line. Some are deciding to pack up and, if they can, retire. Others are hoping and praying that the New Market will work. But they know as we all know that markets, like towns, are communities that work together. And if the anchor stalls don’t transfer to the New Market that is no longer Scunthorpe Market with its long history of success but, bizarrely named, St John’s Market with no link to the area and no history they are wondering what chance they have for the future.